Andy Widman’s Memorial Service was yesterday, and I thought it was a fitting tribute and a welcome celebration of God in the life of a strong young man. I was blessed to be able to speak a few words, remembering him both as a member of the TCS class of 1996 and as a fellow minister of the Lord.

I was extremely nervous to speak–perhaps more than I’ve been in a long time. It was both like and unlike preaching a sermon. Jesus was the centerpiece, but it was Jesus in the life of my friend rather than Jesus in the Word. Regardless, I consider it one of the greatest honors of my life to be able to publicly remember such a godly man.
I was also blessed to reconnect with many of my former classmates, their parents, teachers, and faculty from Toledo Christian. I was both flattered and frightened to learn how many people from that phase of life have been reading my blog! I didn’t think anybody read this except for the few of my friends who would feel guilty if they didn’t.
It was nice to catch up with so many of the class of ’96. Of course I see Nick every time I go to Grace in Toledo, but it was wonderful to see everyone else. We’ve all grown and matured so much. It’s just so terrible that it was Andy’s death that brought us back together again. May we walk as closely with Jesus as he did.
…
While I was talking with my wife on the ride home, I realized that I’ve gained 50 pounds since high school! What?!?! …It helps that I was disgustingly skinny then. You may remember me from such infomercials as, “Feed the Children, Toledo,” and “How to Disappear by Turning 90 Degrees to Your Left.”
July 28, 2008by andy
Blog

Andy’s funeral was overwhelming. As we drove to the church (the largest in the area) I was in disbelief at the sheer number of police cars outside. There must have been well over 500 cruisers parked in the lots and lawns of the church. Police officers had come from all over the state and over 100 different law enforcement agencies to pay their respects to my friend. I think Andy would have found it hysterical.

Andy and Susanna’s pastor from their GCTS days gave the opening sermon and played the role of emcee. He did a wonderful job of communicating the true purpose of Andy’s life–serving Jesus Christ. The Lieutenant Governor of Florida followed, and we were surprised to hear that Andy’s father-in-law, also a pastor, had presided over the Lt. Gov.’s mother’s funeral. He seems like a kind man, and he also professed Christ to the gathering. After the Lt. Governor, Andy’s shift supervisor with the department spoke about Andy’s brief time on the force. He was visibly shaken by what happened while he told us several funny stories of Andy’s time as a police officer. Andy’s brother-in-law, Joe, spoke for the Widman family. Joe did a great job, and continues to do well as the rock for the Widmans during their nightmare. Susanna’s brother followed Joe, and it was so nice to hear her big brother’s perspective of Andy. He then escorted Susanna to the podium, and stood behind her while she spoke with such tenderness about her husband. She showed a lot of strength and grace, and refused to speak out of any bitterness or anger she may have in her soul. (I honestly don’t think she has any, which is remarkable.)
(One thing of note: During the slideshow of Andy’s life there was no sound other than the music and the sniffling of 2500 people crying. But at one point I heard Samuel, Andy’s 4-year-old son, cry out, “Poppa!”)
After the funeral, a long procession (and the word “long” cannot begin to describe it) traveled 4 miles to the gravesite. As we drove, hundreds of sympathetic mourners lined the streets to pay their respects. A lot of folks came out of their businesses and stood on the side of the road, hands over their hearts. It was a moving tribute for a great man they never knew. Thank you, Ft. Myers, for all you have done for my friend and his family.
At the gravesite, they gave three American flags–the first to Susanna, the second to Andy’s mother, and the third to his son. As the bagpipes played, I stood and stared, because I thought I didn’t have any tears left. But then they played the “last call.” (His badge number was 413.) “Ft. Myers to 413.” No answer. “Ft. Myers to 413.” No answer. “Ft. Myers to 413.” No answer. “Officer Andrew Widman is 10-7. Gone but not forgotten.” That was the saddest thing I’ve ever heard. My body found the tears to release, and finds them again as I write this.
One thing is clear from Andy’s funeral: his life was dedicated to Jesus Christ. The gospel went out to the whole city of Ft. Myers on Wednesday, and I think that is what he would have really wanted. Above all else, he was a man of God. That truth cannot be denied, and you can read it in every news report, and hear it from everyone who knew him.
…
Thank you, Andy, for the life you lived. Thank you for the kind words you have spoken to me. I will not forget them.
You may have been killed as a police officer, but I believe you died a martyr for Jesus.
You died with your eyes open and a smile on your face, and we all know that on that dirty sidewalk, outside of a night club, you saw Jesus.
July 25, 2008by andy
Blog 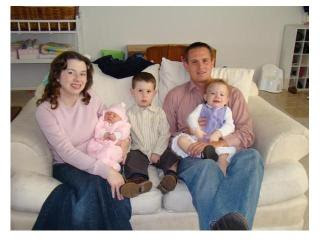 Andy Widman was killed on Friday. He was a great friend that I’ve known for over 20 years. I’m still in shock.

The Joys of Fatherhood 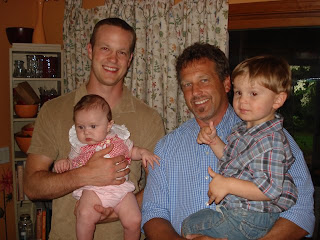 Eisley and Cyrus with Uncle Jarett and Poppy

I love my kids. Cyrus, our two-year-old boy, is a brilliant, hilarious, rambunctious little man. Eisley, our five-month-old daughter, is a happy, exuberant, and loving little girl. I think about their precious little faces and my heart melts. Every time I hold them I have to press my lips into their big, puffy cheeks. I can’t help it. They both have huge cheeks! (Five years ago, I never would have thought I’d be talking about things like this. My, how things change!) Last night was a tough night with the kids, though.

We’ve been trying to figure out how to get Eisley to sleep through the night. So last night we decided to swap the kids’ bedrooms. Eisley has been with us, so we moved Cyrus’ bed into our room, and put Eisley’s crib in Cyrus’ room. We thought this would help us let her cry herself back to sleep when she wakes up in the middle of the night. What we didn’t count on was how the new change of scenery would affect our son.
Cyrus was up until 3:00 AM this morning. I have no idea why. He was tired, as were we. He was sleeping on the same bed he always sleeps on. He was even asleep when we went to bed. But at 11:45, when Eisley started crying the first time, he woke up and didn’t go back to sleep for over three hours. For those of you who may not have kids, that’s a long time. A really, really long time.
When he finally fell asleep…well, if you’re a parent, you know what happened next. Eisley started crying. One kid goes down, another one gets up. That’s the law of childhood. That’s what the kids talk about in their baby-language. We think it’s nonsense, but it’s a real language. Let me translate for you.
Cyrus: “Hey Eisley, when you cry tonight, make sure you cry loud enough to wake me up.”
Eisley: “Why, big brother?”
Cyrus: “Because–oh wait, here comes mommy–ice cream, basketball hoop, baby Eisley, Veggie Tales–okay, she’s gone. You need to make sure I wake up so that I can keep mommy and daddy up until 3:00 AM.”
Eisley: “But why would you want to do that?”
Cyrus: “I don’t know. Do I need a reason for everything?”
Because babies are cute and cuddly even when they keep you up until 4:45 AM.
July 8, 2008by andy
Page 69 of 71« First...102030«68697071»