A Picture of the Universe

Have you ever wondered how the ancients viewed the world? What did they think the universe looked like? Here’s a good representation created by Michael Paukner. You can find it here. 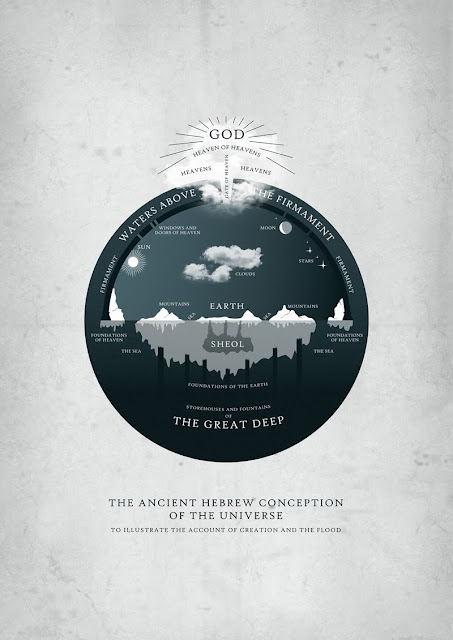 While I’m not sure he and I share the same appreciation for the Bible, it is important to know how the ancient Israelites pictured the world. And who knows that in 5000 years people won’t be laughing at our picture of the universe.

Yesterday I blogged about how modern folks have a certain way of looking at the world and the nature of the existence of an object, or its ontology. We tend to think of the material properties of an object as its primary characteristic of being. In other words, a coffee table is still coffee table regardless of where it is or how it is used. But the ancients didn’t think this way. They weren’t concerned with material origins because that question was settled—whatever was made was made by the gods. Instead, they thought in terms of functional origins. Of course the gods made the sun but their concern was with how it came to function in the world.

Because the ancients held to a functional ontology, we need to rethink a very important word in Genesis 1—create. If the most important thing about something is how it works instead of what it’s made of, we need to understand the word create in terms of function instead of materials.

In his book The Lost World of Genesis One, John Walton does a comprehensive word study on the Hebrew word bara, which we translate create. (And remember, in order to read a text literally its crucial that we know how to read it in the original language, not our English translation.) He finds that in every instance of the verb bara, God is the subject and the object is difficult to identify in material terms. This leads him to conclude that “the Israelites understood the word bara to convey creation in functional terms.” (43)

So what does this mean? When we read Genesis 1:1, we tend to read it like this:

In the beginning, God created the heavens and the earth out of nothing.

Of course none of us consciously add that bit at the end because we wouldn’t dare do that to the biblical text, but that’s the assumption that we work from. To create something means to give it material properties. But to the ancient mind, to create something means to give it a function and a purpose. So the first readers of Genesis 1:1 probably read it in some way like this:

In the beginning, God established the system of heaven and earth.

And the rest of the chapter doesn’t so much tell us how he did that, but why he did it.