God Is Great, God Is Good

Way back in the day, I used to make mix tapes when I was a kid. I would put together a list of all my favorite songs and painstakingly record them to a cassette tape. That’s right, a cassette tape. I even went so far as to design cover art for the tapes. Don’t hate.

God is Great, God is Good (edited by William Lane Craig & Chad Meister) is kind of like a mix tape. It’s a collection of essays from many of today’s leading evangelical scholars, including Alister McGrath, Scot McKnight, Gary Habermas, John Polkinghorne, and others. The book is like a mix tape in that it gets the best that these authors have to offer, each writing within their respective sweet spots. (Wow, talk about mixing my metaphors!) 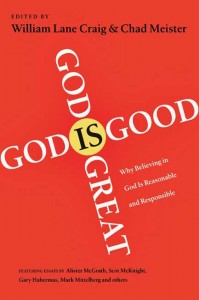 The subtitle of the book is, “Why Believing in God Is Reasonable and Responsible”. This is a book of apologetics written in response to the New Atheists—Richard Dawkins, Sam Harris, Daniel Dennett, Christopher Hitchens, et al. William Lane Craig opens the book by lobbing an attack against Dawkins’s arguments that God cannot exist, and the rest of the authors follow suit with short, succinct apologies for various elements of Christian faith.

Due to the nature of the book, most of the chapters are too short to present a sustained argument. This is the sort of work that hits the highlights, and then points you to further resources for more detailed information. This approach is perhaps most useful for Christians who have occasional interactions with skeptics because it will provide them with basic answers to some of the questions that have been made popular by the writings of the New Atheists. While not making any comment on the quality of the work, I would call this a primer on apologetics, not a textbook.

Some of the most rewarding material comes at the end, where the reader will find an interview between Gary Habermas and noted atheist-become-theist scholar Antony Flew. Flew was one of the most influential atheist voices in the world in the last half of the twentieth century, and his conversion to theism in 2004 caused quite a scandal. While, to my knowledge, he never became a Christian before his death in April, his “leap of faith” was certainly a dramatic and powerful conversion.

Also at the end of the book is an Appendix written by Alvin Plantinga, where he reviews Dawkins’s book “The God Delusion”. If you don’t know who Alvin Plantinga is, you would do well to look him up. Have you ever heard someone say something like, “If God exists, and he is good, why is there evil in the world”? This is often assumed to be an ironclad proof that God does not exist. Well, not anymore, thanks to Alvin Plantinga. I won’t go into details here, but almost no serious philosophers consider the problem of evil to be a legitimate critique of the existence of God.

If you’re interested in apologetics, especially in conversing with people who are influenced by the New Atheists, then you should definitely pick up this book. You’ll find that the arguments of Dawkins, et. al., are really not so devastating as they seem. If you’re really serious about Christian apologetics, then you’ve probably already read everything in this book. No need to pick up the mix tape when you already know the albums.