The Gospel According to Jesus

The thesis of The Gospel According to Jesus is that Christians have long misunderstood the concept of righteousness, and therefore misunderstood their faith. We have mistakenly categorized righteousness in terms of morality and good behavior, he says, and have grossly mistaken the gospel of Jesus Christ for a set of rules and regulations for life. The impetus for the book seems to have come from a Barna survey in which a majority of Christians (including active churchgoers) confessed to being unfamiliar with the term and concept of righteousness. Of those who had heard of the term, most associated it with holiness or faithfulness.
This deeply troubled Seay, because he believes that a proper understanding of righteousness is essential to Christian faith and practice. Here is his definition of righteousness:

That’s all well and good, but is that really what righteousness means? He says it, and he is the president of Ecclesia Bible Society, but is he right? Because he never really proves it. And there are plenty of instances in Scripture where we find the word righteousness, but it certainly doesn’t mean “restorative justice.” 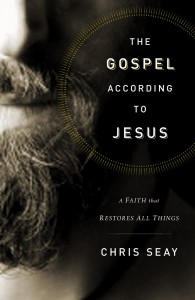 For example, Genesis 15:6. Abram believed the Lord, and he credited it to him as  restorative justice.

Or Deuteronomy 6:25. And if we are careful to obey all this law before YHWH our God, as he has commanded us, that will be our  restorative justice.

In fact, perhaps the most damning case comes from Matthew 6, the same chapter in which we find the command to “seek first his…righteousness.” Verse 1 reads: Be careful not to practice your  restorative justice in front of others to be seen by them. If you do, you will have no reward from your Father in heaven.

Chris Seay was very upset because he believed the church was getting righteousness wrong. But it seems that Chris Seay has also gotten righteousness wrong, or at least defined it too narrowly. I can’t attempt to provide a definition here, but I believe that restorative justice is part of what righteousness means, but by no means all of it.

With that, somewhat major, caveat, I thought this book was excellent, and well worth a read by anybody trying to figure out how to follow Jesus well with others. This is really a book about being disciples of Christ together, and the author even models that by bringing in other voices for conversation at the end of each chapter. The most beneficial chapter is actually the last one: The Ten Commandments of a Shalom Life. In that chapter, Chris draws on his experience as a pastor and church planter to give a good and biblical perspective on how to live well the commands of Jesus together.

All in all, this was an interesting and thought-provoking book that will resonate with younger Christians who feel caught between the pull of conservative fundamentalism and liberal emergent-ism.