Zeke has fallen off a cliff.

For those who haven’t read my wife’s account of what has happened to our son Ezekiel in the past few days, you can read it here. He has significantly regressed since getting his feeding tube, and death seems far more imminent today than it did just two weeks ago. His body is constantly twitching and jerking in large, involuntary movements that steal his ability to rest or be comfortable. These movements are not the result of seizure activity, but of something much deeper, much more insidious, going on within his brain. The Batten Disease from which he is dying seems to be accelerating. Most children with his form of the neurological disorder die between the ages of 8 and 12. We suspect he’ll be gone within the next six months.

Breena and I have been faithfully praying for Zeke’s healing for over a year now. I know that many of those who read this blog, and my wife’s as well, are joining us in this prayer. As are other friends, family, friends of friends, and complete strangers. There are, quite literally, thousands of people all over the world that are praying for Zeke and for us. Our new church family, Grace Church in Toledo, has also been persistent in prayer for Zeke. After the service yesterday, Breena and I took Zeke forward for prayer. As Ralph, one of the elders, was praying for him, many others joined in and engulfed us in their prayers and tears. It was a very emotional moment for both Breena and me. 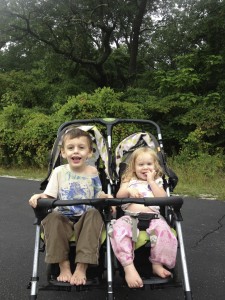 But despite all these prayers, Zeke’s condition has worsened. The picture on the left was taken less than a month ago, but the Zeke you see there is nothing like the Zeke that is shaking in Breena’s arms right now.  This has been a source of deep frustration for me. After all, Jesus said in John 14:13-14, “And I will do whatever you ask in my name, so that the Father may be glorified in the Son. You may ask me for anything in my name, and I will do it.” I have asked in his name, and yet he has not done it. Thousands have asked in his name, but still he has not done it. In fact, the silence we have heard from heaven regarding Zeke’s healing has been unbearable. We pray, and…nothing. No word from the Lord. No sense from heaven. No comfort of the soul or warming of the heart. Not even a sense that he’s going to die.

To make matters worse, we recently started praying that God would have mercy on Zeke, and if that meant taking him home, then we could accept that. Just please don’t drag out his suffering. Shortly after we started praying this way he took this major turn for the worse. It seems as though God has been ignoring all of our prayers for his healing, but he jumped all over our prayer for a merciful death. What am I supposed to make of this?

Whether God’s mercy is responsible for Zeke’s downturn or not I don’t know, but I do believe in the goodness of God, and in his kindness. God is not killing Zeke. In fact, I believe it is God’s will that Zeke be healed, but I also know that God’s will is not always done here on earth. (Why else would Jesus tell us to pray that it would be done here just like in heaven?) But why this unbearable silence? I can hear him speak to me about other things, but not about my son. Is there something wrong with me? Do I lack faith? Is my prayer closet inappropriately adorned? Or could there be something much deeper going on here?

Matthew 26:36-46 tells the story of Jesus’ prayer in Gethsemane. It was the night before he was to be crucified, and he was in deep distress. He told his disciples, “My soul is overwhelmed with sorrow to the point of death.” His instinct is to pray, so he does. Three times he asks his Father to let this “cup,” meaning his crucifixion and all that goes with it, pass by him. Let there be some other way! What was the Father’s reply? We don’t know. So far as we know, the Father said nothing, because nothing is recorded in Scripture. Another unbearable silence.

Many years later, the apostle Paul wrote a letter to a church in Philippi, in which he wrote “I want to know Christ—yes, to know the power of his resurrection and participation in his sufferings, becoming like him in his death, and so, somehow, attaining to the resurrection from the dead.” Did you catch that? Paul wanted to participate in the sufferings of Jesus so that he could become like him in his death and then be like him in his resurrection. The core suffering that Jesus experienced wasn’t the physical pain of being crucified, though I imagine the pain of that was overwhelming. No, the worst of Jesus’ suffering was the cosmic reality behind his anguished cry, “My God! My God! Why have you forsaken me!”

The Father and the Son [and the Spirit], together as one beyond time, were here, at the cross, torn asunder as Jesus became the sacrifice for human sin and the object of God’s wrath against that sin. The Trinity was broken. This is the suffering of Jesus, and it is a depth of suffering that you and I can never fathom or experience. But we catch glimpses of it. We feel the bee-sting prick of the sword-slash of Godforsakenness when we suffer and God is silent. This is when we begin to know Jesus in suffering.

To know Jesus in suffering. Have you ever longed for that? Probably not. I know I haven’t. I’ve always wanted to skip the whole crucifixion part and just go straight to the resurrection section. But there can be no resurrection without crucifixion. If suffering is central to who Jesus is–and Paul seemed to think that it was–then we must participate in the suffering of Jesus in order to know him. That, of course, doesn’t require us to be literally crucified. But it does mean that there will come times in our lives when God is distant, silent, or seems to have rejected us when we need him most. It is in those moments that we participate in the suffering of Jesus. These are the depths of sharing in the suffering of Jesus, becoming like him in his Godforsaken death, that lead to the heights of knowing the power of his resurrection.

My heart is broken for Zeke, but I’m not afraid for him. I know what, and who, awaits him. Though I pray and experience the silence of God, I can rely on the hope that I have learned from God’s voice over the past 30 years of my life. I know that resurrection awaits both me and Zeke, and that before either of us gets there, we’ll have known Jesus in suffering in our own unique ways. Maybe it’s all too ironic, but in this way, the unbearable silence of God is making room for the comforting word of God.