Autonomy means I govern myself. It means I get to do whatever I want. It says, “You’re not the boss of me. You don’t get to tell me what to do.” Autonomy is a distorted picture and immature understanding of freedom. And it has become so fundamental to the way we understand ourselves and the world, that every one of us, myself included, defaults to this position. “Nobody gets to tell me what to do.” 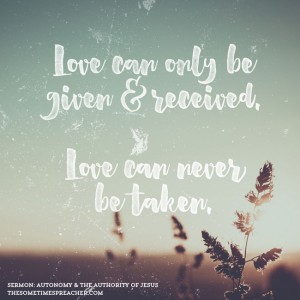 And it’s in this context that we apprehend Jesus. Each of us comes to Jesus from this perspective, from this sense of autonomy and self-interest. And so when we think of a Messiah, we think of him as the most self-discovered, most self-actualized person who ever lived. Nobody could tell Jesus what to do! He always did what he wanted, and no one has ever been as fulfilled as Jesus. Just look at the way he threw shade on those manipulative and distorting Sabbath-keepers. We look at Christ and we see the ultimate, sovereign, autonomous self. Autonomous American Jesus shouts, “I do what I want!”

But that’s not what Jesus says. In John 5:19 he says, “Very truly I tell you, the Son can do nothing by himself; he can do only what he sees his Father doing, because whatever the Father does the Son also does.” What? That’s one of the most UnAmerican things anyone has ever said. Jesus, be your own man. I thought the Messiah was supposed to be some sanctified version of the Marlboro Man, some awesome tough guy cowboy that nobody can mess with and who always does what he wants. Jesus is the ultimate entrepreneur. Jesus doesn’t have a boss. Nobody gets to tell him what to do. No one who was truly from God would be so dependent, so submissive, so self-less. How can someone from God, someone who claimed to be equal with God, be so self-disinterested?

This is why: “For the Father loves the Son.” Love. Our hearts leap at the sound of it. Our eyes fall. What is this? Love. Autonomy, that which names all external forces manipulative and distorting, has destroyed in us the ability to both give and receive love. Autonomy has taught us to take love, but you can’t take love. And so we are empty. The most autonomous self shouts, “I do what I want,” as if trying to convince himself that being able to do whatever he wants is what he really wants to do. But the most loved person gently whispers, “I can’t do anything by myself. Whatever God does, that’s what I do. Because I am very deeply loved.”

Love, agape love – this love that lays down its life, that sets aside its rights, that forgives sins, that breathes life where there was death – this love rescues us from the trap of autonomy. This love, the love we see most clearly at the cross of Jesus Christ, sets us free – really free – from the vain pursuits of self-discovery and self-indulgence, and enables us to do the work that God is doing.

Love is the work of God, and there is no Sabbath from love.