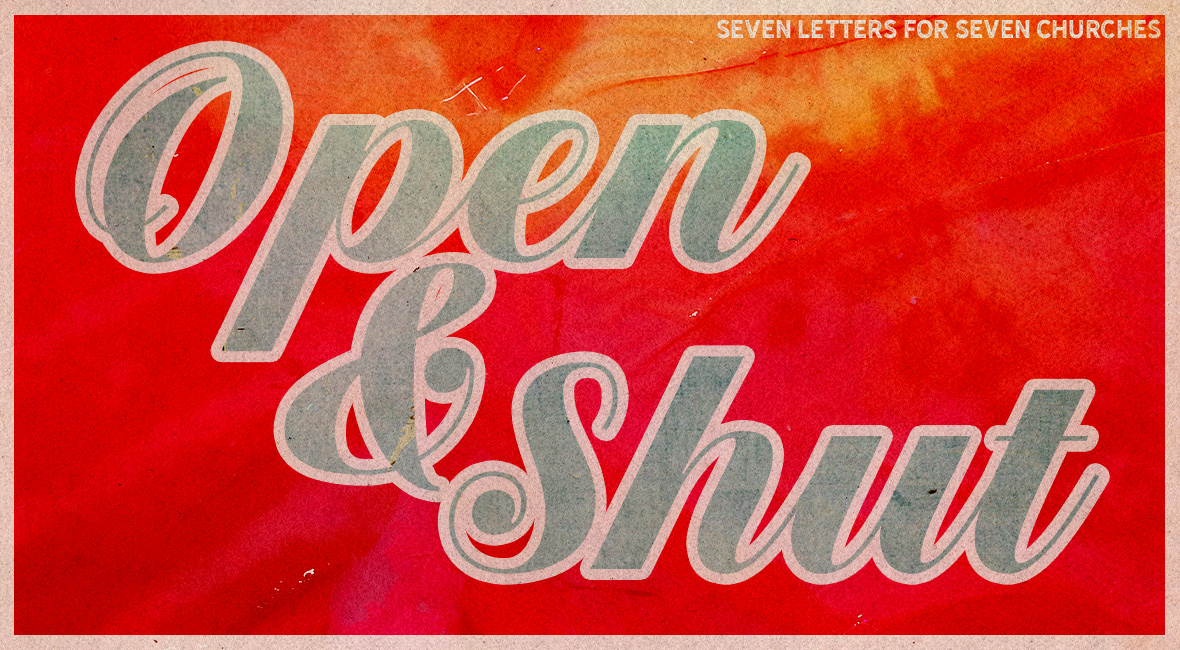 To the angel of the church in Philadelphia write: These are the words of him who is holy and true, who holds the key of David. What he opens no one can shut, and what he shuts no one can open. I know your deeds. See, I have placed before you an open door that no one can shut. I know that you have little strength, yet you have kept my word and have not denied my name. I will make those who are of the synagogue of Satan, who claim to be Jews though they are not, but are liars—I will make them come and fall down at your feet and acknowledge that I have loved you. Since you have kept my command to endure patiently, I will also keep you from the hour of trial that is going to come on the whole world to test the inhabitants of the earth. I am coming soon. Hold on to what you have, so that no one will take your crown. The one who is victorious I will make a pillar in the temple of my God. Never again will they leave it. I will write on them the name of my God and the name of the city of my God, the new Jerusalem, which is coming down out of heaven from my God; and I will also write on them my new name. Whoever has ears, let them hear what the Spirit says to the churches.
-Revelation 3:7-13

Jesus is pretty intent on making it clear to the church in Philadelphia that he is the Jewish Messiah. As far as he’s concerned, it’s an open and shut case. Obviously. He calls himself the Holy One and the True One. He says that he holds the key of David. I’m not exactly sure what that means, but it’s obvious that all of these are significant claims. He also seems to know who is and is not authentically Jewish, and the local synagogue is definitely not a true Jewish synagogue. In fact, he goes so far as to call it a synagogue of Satan. As the Jewish Messiah, Jesus is able to discern who is and is not a real member of God’s family.

When Jesus tells John to tell the church in Philadelphia that he holds the key of David, I think what he means to say is this: I am the only one who can open the door to the Messianic kingdom. The new reality that awaits the people of God is locked, and only Jesus can take us into this awe-inspiring, wonderful space. He is the one who opens or closes the door to new creation. In the Gospel of John, Jesus refers to himself as the gate, and access into God’s family is only granted through him. Here in Revelation, Jesus puts it in even starker terms: What I open no one can shut; what I shut no one can open. There isn’t another way into the Messianic world. It’s Jesus or nothing.

Jesus told the church in Philadelphia that he has placed an open door in front of them. How do we know when Jesus has placed an open door in front of us? If no one can shut what he opens, then aren’t the doors he opens in our lives pretty significant? Shouldn’t we do everything in our power to walk through them? But not every open door comes from Jesus. So how are we supposed to know which ones come from him, and which ones come from somewhere else?

If Jesus opens doors in our lives, then I think it’s safe to assume that they will remain open as long as he wills. They probably won’t stay open forever. And if we’re just standing there, too afraid to go in, then Jesus is probably going to shut that door. He may open it for someone else, but he’s probably not going to open it for us again.

The doors that Jesus opens will remain open only as long as he wills.

Some friends and I were talking once about inspiration and ideas that come to us. One of them told the story of an idea that they had for a book ten years earlier, but they hemmed and hawed on it, and for one reason or another never pushed past the idea stage. Several years later, someone else wrote that exact book. He said it was as if God gave someone else the book because he made too many excuses to write it. If God gives us something to do, it’s because he wants that thing done. If we refuse to do it, whether from laziness, cowardice, or outright disobedience, he’s going to take that thing away from us and give it to somebody else. So if God gives you an open door — whether that’s a prompting in your spirit, a great idea, a kingdom opportunity, or even something as mundane as a new career opportunity — you had better find the courage to walk through it.

But not every opportunity is a Jesus-opportunity. We need to exercise discernment to see which doors have been opened by him. Here are some diagnostic questions to ask of your open doors:

If Jesus opens doors in our lives, then he also shuts them. Or to be more precise, he doesn’t open certain doors, at least not yet. Closed doors also come from Jesus, and they will remain closed as long as he wills. One of the most significant closed doors in my life was the end of my time in vocational ministry. This was, and continues to be, a difficult thing for me to live with. I did not want my time in ministry to end. It was never my intention to leave full-time vocational ministry and start a business. For 20 years I have felt a strong call of God on my life to preach and proclaim his word to the church. And yet, Jesus has closed this door. And there’s nothing that I can do to reopen it.

When we encounter closed doors in our lives, we can do one of two things: We can either wait around with our nosed pressed against the door waiting for it to reopen; or, we can go find the door that’s open. In my opinion, the best thing to do is almost always to go find the open door. That doesn’t mean that we can’t mourn the closed doors of our lives. We should do that. And we don’t have to move on immediately. Don’t pretend like that lost opportunity, or the end of that career is nothing. It’s something. It hurts. And that’s okay. But eventually you’re going to have to pick yourself up, look around, and go find the door that Jesus opened for you. It’s going to take patience, of course, because the shut door will rattle you and you’re going to need time to get your bearings again. So don’t go rushing off after every opportunity. Be patient. Be discerning.

Doors open and doors shut. That’s the way life goes in old creation. You’re not the first person that this has happened to, and you won’t be the last. Just be courageous about the next open door that Jesus puts in front of you. Walk through with purpose and conviction, with the confidence that comes from knowing your Shepherd’s voice and hearing him calling you from the other side. And don’t be too discouraged about the next door that he closes. If you need to repent of cowardice or laziness, do it. And don’t make those same mistakes the next time. Open doors require courage, closed doors require patience, and all doors require discernment.