This weekend I begin my four week class on Apologetics–a defense of the Christian faith. This one is challenging for me because I’m no apologist. But it needs to be done, and I’m the one who thought of the class anyway, so I guess I’m stuck.

In preparing for the class, I visited some websites for skeptics and ex-Christians. I wanted to get an understanding of what others think about our faith, particularly those who might be on the more hostile end of the spectrum. What I found was interesting.

There are a lot of very bright people who have very good reasons for not believing. For many, the Christian faith is unreasonable and illogical. It simply doesn’t add up. They understand Christianity to be at odds with Reason (Faith v. Reason, Faith v. Science) and have chosen the latter. The have well-formed and well-thought arguments to express their position.

I also found a lot of stories of pain and disillusionment. They tried Christianity and it didn’t add up. The promises that church leaders made were broken. Christianity didn’t deliver the goods, nor did Christians live up to the ideals and mandates of their faith.

Though probably none of these people will be in my class, I want to engage in apologetics in such a way that honors them. As we move into these spaces, we must do so as people who listen first, and when we open our mouths, we speak intelligently, with humility and honesty. No games. No intellectual short cuts. No preacher’s tricks. No shouting. No name calling. No condemning. The point is not to win their souls through well-reasoned arguments, but to honor them as human beings who are still very greatly loved by God. As Paul wrote to the Colossians: “Be wise in the way you act toward outsiders; make the most of every opportunity. Let your conversation be always full of grace, seasoned with salt, so that you may know how to answer everyone.”

The Gospel and Babies 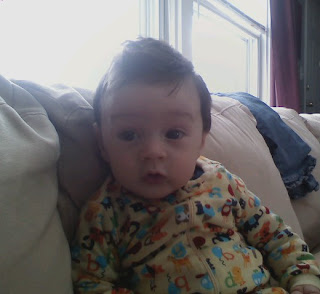 This is Ezekiel. He’s three months old and, obviously, the cutest little thing you’ve ever seen. When I put him to bed, I lay down next to him and tell him how much I love him. Then I tell him how much Mommy loves him, and how much his brother Cyrus and sister Eisley love him. I go on and on like this until I’ve gotten through every family member. I want to make sure he knows that he is very greatly loved.

But then I tell him that there is someone who loves him even more than all of us combined, and that is God. I tell him that God sent his son, Jesus, to us, and that he was once a little baby just like you. And then he grew up into a man like daddy, and he walked around doing amazing things and telling people how much God loves them. But then he died. And when that happened, Jesus took all of the bad things that we do and threw them all away so that God doesn’t even think about them anymore. Just a couple of days after he died, he came back to life! He was too great and amazing to stay dead! And a little while after that he went up to heaven where he sits on a throne because he is the king of the universe. And do you know what the best part is, little Ezekiel? The best part is that he wants to be your best friend.

This is the sermon I preached at our Ash Wednesday service this year. Actually, I think it’s pretty much the whole service.

If you’re involved in ministry, particularly in mainline denominations, you should read this article. As a non-denominational, evangelical guy, I’m beginning to see the writing on the wall that was etched onto the edifices of the mainline churches fifty years ago. The reality is that our current models of Church are unsustainable. Large, professional staffs with massive administrative and bureaucratic support will become an unbearable burden to congregations.

Thanks to the rising general level of education and now the wide dissemination of knowledge over the internet, the average person is becoming more and more free to live without the guidance of social and professional ‘betters’. For the very large majority of people around the world, that kind of empowering freedom is what progress is all about.

People don’t look to the pastor as the expert anymore. They know just as much, and often times much, much more, than the church leaders about any given subject. A seminary degree, while important, doesn’t carry the same weight as it used to. You can’t just preach anymore, you have to dialogue. You can’t come down from the mountain like Moses and dictate your vision to the masses. The masses are people, and they each have their own ideas about how things ought to go. You have to listen and ask questions and seek input. When the boomers are gone, they’ll take the top-down, expert-led model of church leadership with them. The chickens of the Reformation are coming home to roost. I just hope they still come to church.

In my last post, I claimed that, for Jesus and other faithful Jews of his day, the gospel could be summed up in the simple phrase YHWH is King. I called this Gospel 1.0. But it’s only version 1.0 because Jesus came and, through his life, death, resurrection and ascension, provided a subtle but crucial nuance to the gospel.

When Jesus came preaching through Galilee he announced, over and over again, that the kingdom of God was now upon Israel. In fact, Luke records his first public teaching as the reading of a kingdom-passage from Isaiah. After reading this passage, Jesus sat down and simply said, “Today this Scripture is fulfilled in your hearing.” In other words, Jesus was saying that the kingdom of God was breaking upon you through me. YHWH is becoming King (truly, fully, and over against all the other gods of all the other nations that had oppressed Israel) in and through the life and ministry of Jesus. (This is a summary of what N.T. Wright writes in, among other places, The Challenge of Jesus.)

So Jesus is essentially walking around ancient Israel saying, believe the gospel that YHWH is King, and watch it happen through me. The funny thing is that Jesus was probably not the first to say this (there were plenty of other would-be Messiahs in his day). But Jesus is the only one who could back it up, not by defeating Rome, but by defeating sickness, demonic powers, and in several instances even death itself.

Ultimately, of course, Jesus defeated his own death. His resurrection was the decisive victory over Israel’s (and all of humanity’s) true enemy–Satan, ruling through sin and death. His ascension was not so much spiritual space travel as it was the act of the true cosmic king taking his rightful place on the singular throne over all creation. As Paul writes in 1 Corinthians, the Father put everything under the authority of the Son. In other words, Jesus is King.

This is the Gospel 2.0–the good news as Christians understand it. Jesus is King (or, if you prefer, Lord). Because of the obedience of the Son, the Father placed him on the throne and put him over all things (except for himself, of course). The kingdom of God, then, is ruled and mediated by Jesus. It is his kingdom. YHwH is King because of what his son did; and because the Son did what he did, the Father made him king. That’s the Gospel 2.0–Jesus is King.