A Long Faithfulness by Scot McKnight

Imagine this fictitious scenario: Mark Driscoll walks to the stage this Sunday morning, looks straight into the camera as he lets out a wry smile. “This whole Jesus thing is nothing but a bunch of *bleep*. You pansies that believe this stuff are ignorant fools, more equipped to knit your grandma a pair of socks than do anything useful to society.” He goes on for 45 minutes mocking Christians, berating Scripture, and blaspheming God. For the rest of his life he writes books and gives lectures for the sole purpose of destroying Christianity.

This, of course, if it actually happened, would raise all kinds of issues for people who know and love Mark, but one of the most important ones is this: What is Mark’s eternal destiny? In the face of such a fall, it would be difficult to say that Mark will still enjoy eternity with God. He has, after all, abandoned Jesus. If, then, his eternity will be spent apart from God, in hell, what are we to make of his fruitful years of ministry–years in which he prayed, worshipped, preached, and evangelized? What are we to make of his faith during this time? Was it genuine? Or was it a farce? In other words, can someone move from genuine, saving faith in Jesus to genuine, damning rejection of Jesus? 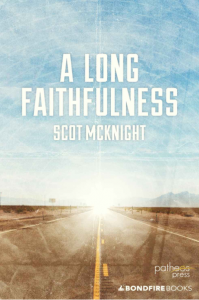 This is, essentially, the question Scot McKnight poses in his new ebook A Long Faithfulness, where he exegetes the five warning passages of Hebrews. The book of Hebrews sternly warns its readers about falling away: “It is impossible for those who have once been enlightened, who have tasted the heavenly gift, who have shared in the Holy Spirit, who have tasted the goodness of the word of God and the powers of the coming age and who have fallenaway, to be brought back to repentance. To their loss they are crucifying the Son of God all over again and subjecting him to public disgrace.” (6:4-6) This is just part of one of five major passages that warn about the dire consequences of leaving the faith.

One of the core tenets of Reformed theology, what McKnight calls “resurgent Calvinism,” is “meticulous sovereignty,” which means that God determines everything, whether good or evil. The recent tornado that destroyed Moore, OK, for instance, was, in this view, sent from God. He even determined which elementary school would be destroyed, which children would perish, and which would be spared. In terms of salvation, meticulous sovereignty logically leads to a doctrine called double predestination, which means that God determines, beforehand, which people will receive salvation and which will receive damnation.

If God determines all things, including salvation, then it is impossible for any human to choose or un-choose God. If meticulous sovereignty is true, then nobody has any say in their eternal destiny–each one is subject to the choosing (or not) of God. If God determines all things, then it is impossible for someone to move from genuine, saving faith to genuine, damning unbelief because God either chooses you or he doesn’t. You do not choose God. You do not choose to believe or disbelieve. There is no room for the human to switch positions.

The question then arises: Is this view consistent with biblical teaching? This is an important question to explore and answer. Does the Bible teach that God is the sole determiner of all things? Through his exegesis of the five warning passages of the book of Hebrews, Scot McKnight sees that God is not the sole determiner of all things, but that he has sovereignly given human beings the freedom to choose, and to un-choose, him. The author of Hebrews, McKnight observes, is addressing true Christians with genuine faith who face the very real threat of becoming apostate–that is, of walking away from Jesus and forfeiting their salvation.

Going back to our fictitious example of a potentially-apostate Mark Driscoll (the sad reality is that many pastors have followed the path laid out above), it would be intellectually lazy and biblically unsound to say that, because he renounced Christ, that he never in his entire life actually believed in Jesus. To say that those who fall away never truly believed conflicts with the testimony of the author of Hebrews. Those to whom the unknown author wrote were baptized believers, full-participants in the local churches. They were operating in the gifts of the Spirit. They were living the full Christian life.

If [the original audience of Hebrews] are not Christians, then no one is. If they are Christians, then the nerve of meticulous sovereignty has been severed, for the author conceives of the audience as Christians who not only can, but, in some instances apparently have, apostatized from the faith. That means they are damned. They have un-chosen God.

Scot’s exegesis is sound, and his conclusion is devastating to the doctrine of meticulous sovereignty. According to the book of Hebrews, human beings have the freedom to choose or un-choose God. If a couple gets divorced, does that then mean that they never loved each other? Of course not. In the same way, the act of apostasy does not mean that the apostate was never a true believer. We are free creatures. We have been granted this freedom because God loves us, and desires an agape-love-based relationship with us. Agape love is only possible where there is freedom.

This is an important essay, and a relatively quick and easy read. If you have questions about eternal security, human freedom, and God’s sovereignty, I highly recommend you download this ebook (it’s only available electronically) and give it a careful read.