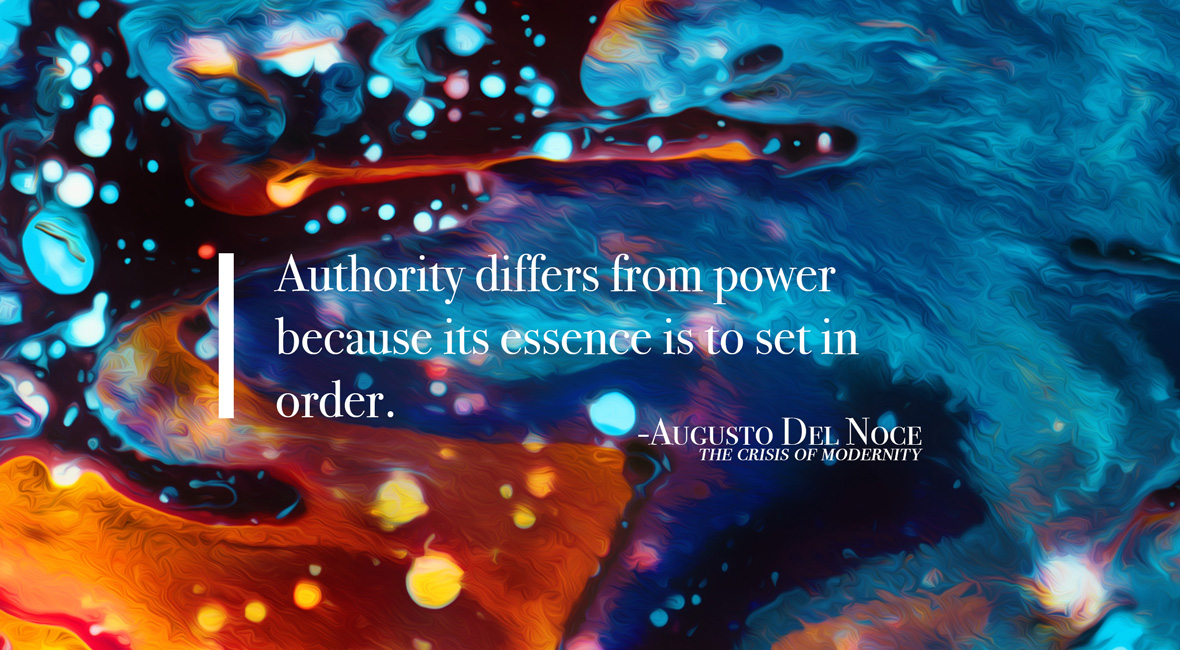 In his excellent essay Authority Versus Power (found in his book The Crisis of Modernity), Italian philosopher Augusto Del Noce draws the lines of distinction clearly and profoundly: “Authority differs from power because its essence is to set in order.” (p. 203) That’s the kind of thought that you have to sit with for a long time. The essence of authority is to set in order.

“Authority differs from power because its essence is to set in order.” -Augusto Del Noce

Del Noce arrives at this point by beginning with the etymology of the word authority, which is derived from the word augere, “to make grow.” Because of where the word comes from, Del Noce asserts that authority is about causing others to grow. It is, as Jesus taught his disciples, a position of service. In stark contrast to what we find in our cultural stories, Del Noce declares, “authority includes the idea that [human nature] is fulfilled in man when a principle of non-empirical nature frees him from a state of subjection and leads him to his proper end, as a rational and moral being. Man’s freedom…consists in his capacity to subordinate himself to this higher principle of liberation and be freed from the pressures from below.” (p. 190) Authority exists to free others from the chaos of this fallen world, and to set them on the path of freedom, which can only be found in the order given to creation by its Creator.

The true order is extrinsic to the self. It cannot be found by “looking within” or “following your heart.” The heart and mind – and body and soul, too – must first be ordered to the order of God. In our fallen state, we reject the order of God, choosing instead to create our own order. But as we all know (or will know, eventually), we are incapable of creating order. Our every attempt leads to chaos. “There is a way that seems right to a man, but in the end it leads to death.” We will only bring chaos and ruin until we are rightly ordered to the order of God, and this is the crucial task of those who hold positions of authority.

We will only bring chaos and ruin until we are rightly ordered to the order of God.

The most basic, and therefore the most essential, of these positions is that of parents. Family is the essence of human culture. Parents are authors in the sense that they are the biological creators of their children. We exist because two people authored us in a physical sense. But physical generation is not enough. Parents must also help their children by teaching them to be ordered to God’s order. The Biblical authors called this ‘wisdom.’ In fact, the first third of the book of Proverbs is a series of teachings from a father to a son, and the last chapter of the book is a son reporting the teachings of his mother. Parents are good authorities insofar as they hand down the wisdom of God’s revelation to their children.

So, then, what is the order by which God has ordered the universe? It is his very nature: self-giving love. In the beginning God created the heavens and the earth, and he created mankind in his image. This means that human beings were created to carry God’s rule on the earth, to wisely govern this planet along with God. God wanted to be here with us. That’s why he made Eden, which was his original garden temple. From Eden he would rule the earth with and through humanity, subduing the chaos of the wilderness and turning it into the beauty and order of the original divine garden. The order of creation is based upon God’s selfless desire to share his authority and glory with created beings. This desire rises not from a curious mind but from a loving heart. We are not an experiment; we are children.

God loves. God is love. God is a community of self-giving love – Father, Son, and Spirit – caught up in an eternal dance of praising and glorifying the other. As David Bentley Hart has written, “God others himself within himself,” and by his love he is three and one. From this self-giving love God creates, and he orders the universe according to this love. He fills the world with beauty and wonder. He puts stars in the sky that we can never reach, just, as the Sleeping at Last song goes, to be seen our eyes. The universe works according to its design when the children of God give of themselves for the sake of others. Authority itself submits to this scheme. It has been established to ensure that God’s wisdom is passed down from generation to generation, so that in every age the children of God may be his wise and generous co-rulers on the earth.

Authority teaches and woos to the order outside itself; power persuades and manipulates to the will within itself.

Alas, things went terribly wrong right from the beginning, and that means that people almost universally misuse, and even abuse, their authority. Rather than an exercise of service it becomes an execution of power. Authority teaches and woos to the order outside itself; power persuades and manipulates to the will within itself. Here, Del Noce, channeling Hannah Arendt, writes, “the obedience and the dependence…required by authority are qualitatively different both from the idea of ‘persuasion’ and from the idea of ‘forced coercion.’ …The submission of the mind to evidence [understood not as force that constrains but as light that illuminates] is more radical than submission obtained through force or persuasion; but at the same time it has a liberating nature (from the pressure of lower or exterior forces).” (p. 194-5) Power drives a man into the darkness, but authority lights the way.

The problem, therefore, is not with authority or with God’s order. The problem is with us. The problem is that we who are called to light the way for others cannot see it ourselves. Del Noce quotes Kierkegaard at the end of his essay: “One human being cannot make another wholly free, because the one with the power is himself captive in his possession of it and is therefore continually coming into a false relationship with the one he wants to make free.” (p. 246) But must things be so bleak? In one sense, yes. This is the nature of things in this fallen world, and things will not be right until Christ comes in judgment. But in another sense, we can do better.

It begins when we learn to love our authorities as Christ loves us. We must learn from the good and forgive the bad. This is the only way to redeem authority for our culture, and in doing that, to rescue our culture from self-destruction. Our elders were not perfect, and the generation that follows us will say the same thing about us. Perfection is impossible, but good is within our grasp. We will not become better authorities by rebelling against bad authorities but by forgiving them, and learning from them whatever lesson, however meager, we can. If there is to be a revolution, let it be a revolution of forgiveness, for this is the demonstration of the self-giving love of the perfect God to the fallen human. Forgiveness is the way that the disordered world is reordered to the order of God whose glory is most clearly revealed on the cross of Jesus Christ.