Finding Jesus in the Sh*t 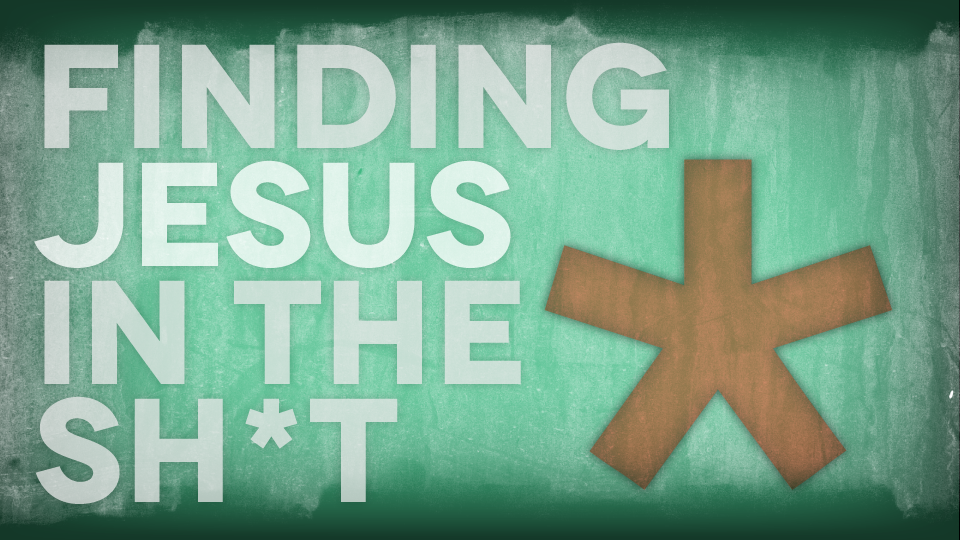 I had an epiphany a while back. Some of the leaders of Ember Church were gathered in our backyard, praying for one another, and it came to me: One of the reasons that Ember Church exists is so that people can learn to find Jesus in the shit of life. While I won’t claim that as a “word from the Lord” (for obvious reasons), it immediately struck me as true. That’s not going to become our mission statement, nor will you see it on any t-shirts, but it has really resonated with me and the leaders of our community.

Life isn’t fair. Sometimes life doesn’t simply hand you lemons, it hands you big, steaming pile of shit and says, in its best Ron Burgundy voice, “Deal with it.” The authors of the Bible, especially of Job, Ecclesiastes, and many of the psalms, understood this reality well.

Of course, it’s human nature to lament the injustice of life. I’m a good person, so why did I wind up with [cancer] [a cheating spouse] [a child with autism]? And there’s never an answer to this question. It’s almost as though the heavens are mocking us, replying in a booming baritone, “Deal with it.”

So we live through these difficult circumstances with a sense of God-forsakenness. We throw up our arms in exasperation and cry out, “God left me! I don’t know what I did to drive him away, but clearly he’s not going to bless me now. He must not want me anymore!” We instinctually believe that God and the shit cannot coexist. We are wrong.

Ask yourself a question: What is the essence of my prayers? For many of us, myself included, our basic prayer is this: Lord, please take this away. Whether it’s a sickness, a trial, or some other kind of obstacle, our basic message to God is essentially, “Make this stop.” We want our lives to be shit-free, and we look to God to be the one to clean it all up.

If that’s your most common prayer, you shouldn’t feel guilty. You’re not alone. The apostle Paul prayed that same prayer to God. Three times he cried out to God for some affliction (unknown to us now) to be removed. Heck, even Jesus prayed the night before his crucifixion, “If it’s possible, let this cup be taken from me.”

Unfortunately, God’s answer to both Paul and his Son was a resounding, “No.” But it was a “No” with a reason. For Paul it was so that God’s power could be made perfect in that man’s weakness. For Jesus it was so that all the world could be saved from sin, death, and the powers of hell.

Now back to our prayers. What if, when we ask God to take our trials away, he is saying back to us, “No, I’m not going to take this away or make it stop, because this is where you’ll find me.” What if what God really wants us to learn in this life is that he can be found in the shit? Where else would we expect to find the God who was homeless, broke, and sentenced to die as a criminal but in the muck and mire – the total shit – of our lives?

You don’t have to get all fixed up to find God; God got completely broken in order to find you. Nobody knows rejection and suffering better than Jesus. Nobody bore the weight of evil, sin, and death more heavily than Jesus. His life was harder than yours. His death was more excruciating than yours will be. Jesus didn’t step out of heaven and into some Roman palace in order to live the most opulent lifestyle available at the time. He came out of a woman’s womb, grew up as a blue-collar handyman in a tiny corner of the world that lived under oppressive, foreign rule. In his hour of greatest need, all his closest friends either betrayed him or abandoned him. And as he died on the cross, he suffered the judgment of God the Father, the one with whom he had had perfect, harmonious communion from eternity past.

Your trials and diseases and crappy circumstances are not a sign of your God-forsakenness. Instead, they’re the signal that God is near at hand, that he can be found here, and that he understands. Your circumstances don’t need to change in order for you to draw close to God, just your attitude.

Whatever it is that you’re going through, Jesus is with you. You can turn to him, right now, and he will be by your side. I would even go so far as to say that it’s easier to find him when life sucks than when everything is going great, if only we would humble ourselves enough to speak his name.

God’s not looking down from heaven, arms folded and brow furrowed, watching while you wallow in the crap of life, exclaiming with divine self-satisfaction, “Deal with it!” No, he’s down here with us, feet and clothes covered in shit, his hand on our shoulder and a look of infinite empathy and reassurance on his face, speaking tenderly, “I’m here, too.”