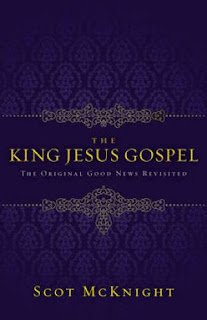 Yesterday I began writing about Scot McKnight’s excellent new book, The King Jesus Gospel. I covered the prologue and first 3 chapters, and I’ve written his basic thesis this way: The Plan of Salvation is not the Gospel, and by mistaking the former for the latter we have created a salvation culture that misses the deep truths of the gospel, emphasizes decision over discipleship, and, as a result, fails to make true disciples of Jesus. This insight is crucial for us to understand, and we evangelicals need to make the switch from a salvation culture to a gospel culture if we want to fulfill the Great Commission, which was to “make disciples”, not “make converts”. Because of the way we (mis)understand the gospel, and the methods we use to present it, we are doing an excellent job of making converts, but we are no better than the Catholic Church at making disciples.

Before I get into the content of the next chapter, I’d like to give some of my own reflections on his book thus far. I believe that we evangelicals have created a salvation culture because we undervalue (or even disdain) life on earth. The temporal pales in significance to the eternal, we say, as though the two were pitted against one another. But this life and the life to come are intimately bound up together within the life of God, which is both infinite and eternal. The life we live on earth is a small but significant part of eternity. The temporal is within the eternal. Salvation is not merely for then; salvation is for now.

We are also simultaneously terrified of and fascinated by hell. Though the most common biblical command is, “Fear not”, we use fear as a motivator to get people saved. So much of our evangelistic strategies are built on the motivation to escape hell, and we certainly prey on people’s fears of eternal damnation. There may be a time when that is appropriate, but the fear of hell is not what drives the Gospel.

Perhaps both of these lines of thinking could be fleshed out more, but this post is supposed to be about Scot McKnight’s book. So on to chapter 4 and a definition of the Gospel.

Chapter 4: The Apostolic Gospel of Paul

If the Plan of Salvation is not the Gospel, then what is? How do we define it? The natural place to begin would be in the Bible. But where do we look? The answer might surprise you. We don’t start in Matthew, or Mark, or Luke or John. We start with Paul, and we go to 1 Corinthians 15.

1 Corinthians was probably written before any of the Gospels were written–sometime around 53 AD or so. What we find at the beginning of chapter 15 is “the oral tradition about the gospel that every New Testament apostle received and then passed on. …This passage is the apostolic gospel tradition.” (46) Scot breaks the relevant portions of chapter 15 into three parts: v. 1-2; v. 3-5; v. 20-28. The fundamental gospel, though, is found in the second part:

This is the Gospel. “If we begin here, we take the first step in creating a gospel culture.” (48) This was the Gospel that drove the early church, but we have forgotten it.

The Gospel is not, first and foremost, about getting to heaven (or escaping hell). It’s not driven by fear. In fact, it’s not even a proposition that can be driven by anything. It’s the Story of Jesus–his death (for our sins), his burial, his resurrection, and his appearances. The Gospel is not the Plan of Salvation. “Salvation–the robust salvation of God–is the intended result of the gospel story about Jesus Christ that completes the Story of Israel in the Old Testament.” (51)

So what? What’s the big deal? Isn’t it more important that people go to heaven when they die than that we understand what the Gospel is or isn’t? No, it’s not. Jesus didn’t die so you could go to heaven when you die. He died for your sins–the ones that plague you in the here and now and turn your world, at times, into a living hell for yourself and those around you. Here’s the warning:

When the plan gets separated from the story, the plan almost always becomes abstract, propositional, logical, rational, and philosophical and, most importantly, de-storified and unbiblical. When we separate the Plan of Salvation from the story, we cut ourselves off [from] the story that identifies us and tells our past and tells our future. We separate ourselves from Jesus and turn the Christian faith into a System of Salvation. (62)

How have we gotten where we are? How have we replaced the gospel culture with our salvation culture? More on that tomorrow…