Run with the Horses by Eugene Peterson

Eugene Peterson’s book Run with the Horses has been around for a long time, but I didn’t pick it up until I was so powerfully struck by Jeremiah 12:5, the verse from which the book’s title is derived. This has become a bit of a “life-verse” for me, one that has struck me time and again when faced with anger or despair.

If you have raced with men on foot
and they have worn you out,
how can you compete with horses?
If you stumble in safe country,
how will you manage in the thickets by the Jordan?

Run with the Horses is a pastoral commentary on the book of Jeremiah. It is not exhaustive, though it covers the most significant events of Jeremiah’s life and ministry. The book is subtitled “The Quest for Life at Its Best”, which is subversive because few of us would like at Jeremiah’s life with envy. He was a melancholy outcast who struggled mightily with the weight of his calling and the resistance with which it was met. He lived through the most trying period in his nation’s history, and ultimately died an ignoble death in a foreign land. 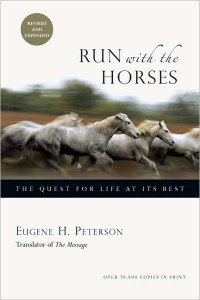 Peterson opens with an exploration of chapter 12, where Jeremiah bitterly complains about the resistance his message has met and the unfairness of life in general. God’s response is what we find in verse 5: “If you have raced with men on foot and they have worn you out, how can you compete with horses?”

Life is difficult, Jeremiah. Are you going to quit at the first wave of opposition? Are you going to retreat when you find that there is more to life than finding three meals a day and a dry place to sleep at night? Are you going to run home the minute you find that the mass of men and women are more interested in keeping their feet warm than in living at risk to the glory of God? Are you going to live cautiously or courageously? I called you to live at your best, to pursue righteousness, to sustain a drive toward excellence. It is easier, I know, to be neurotic. It is easier to be parasitic. It is easier to relax in the embracing arms of The Average. Easier, but not better. Easier, but not more significant. Easier, but not more fulfilling. I called you to a life of purpose far beyond what you think yourself capable of living and promised you adequate strength to fulfill your destiny. Now at the first sign of difficulty you are ready to quit. If you are fatigued by this run-of-the-mill crowd of apathetic mediocrities, what will you do when the real race starts, the race with the swift and determined horses of excellence? What is it you really want, Jeremiah? Do you want to shuffle along with this crowd, or run with the horses? (21-22)

That is the question, as Peterson sees it, that God posed to Jeremiah. It is the same question he now poses to us. We can get worn out by this life, bitterly devolving into a grumbling mass; or we can step outside the rat race to where the thoroughbreds run and test our legs there. “Some people as they grow up become less. …Other people as they grow up become more. Life is not an inevitable decline into dullness; for some it is an ascent into excellence.” (25) Such was the path of Jeremiah.

Peterson sketches Jeremiah’s faithfulness to God through all the horrors of his life: mockery, rejection, famine, siege, desolation, and exile. Through it all he chose to run with the horses, to not be sidetracked by bitterness or disappointment. He was melancholy, but still he hoped in God.

This is an excellent book for everyone, but especially for those pursuing full-time vocational ministry. There is much to be learned from Jeremiah’s life and ministry, particularly for those of us who would dare to speak God’s message.

I’ll leave you with some of the most provocative words I’ve ever read: “It is easier to define oneself minimally (“a featherless biped”) and live securely within that definition than to be defined maximally (“little less than God”) and live adventurously in that reality.” (22)