The Lost World of Genesis One by John Walton

The first chapter of Genesis is the most hotly contested biblical text of our time. Theories and interpretations abound as scholars have turned the chapter upside down and inside out looking for biblical clues (and ammunition) to the origins of the universe. There are at least four major schools of interpretation on Genesis One: young-earth creationism; day-age theory; the gap theory; and the literary hypothesis. It’s time to add a fifth school to that list: John Walton’s cosmic temple inauguration.

Walton derives his thesis from his exploration of Ancient Near Eastern cultures and their creation myths. The problem with the current, Western interpretations of Genesis One is their failure to overcome the distance between our modern culture and the culture of ancient Israel (existing alongside and within larger cultures like Egypt and Babylon, which all have their own fascinating creation stories). “Despite all the distinctions that existed across the ancient world, any given culture was more similar to other ancient cultures than any of them are to Western American or European culture.” (12) 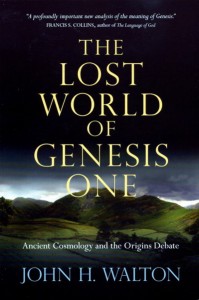 Crossing this cultural gulf means making one significant, and seemingly obvious, proposition: Genesis 1 is ancient cosmology. (16) This means that “it does not attempt to describe cosmology in modern terms or address modern questions.” (16) What, then, are the terms in which it describes cosmology? This is the crucial question, and what sets Walton’s interpretation on a different course from the others.

Moderns tend to think of creation only terms of material origins. What is the sun made of and how did it come into being? How long did it take for the mountains to be formed and how did they get their current shape? What is the physical composition of humanity and how did we get to be the way we are now? These are the questions of a modern, Enlightenment-oriented culture. But these are not the questions of a polytheistic culture, or even a monotheistic culture within a wider polytheistic world? In order to understand Genesis One, we need to ask the questions the ancients asked.

Rather than questioning the material origins of the universe, the ancients told stories about the functional origins of creation. Existence, for them, was not tied to the material properties of an object, but rather to how that object functioned within a closed system. “In a functional ontology, to bring something into existence would require giving it a function or a role in an ordered system, rather than giving it material properties.” (26) Walton proves his point through numerous examples from ancient Near Eastern texts, and concludes with this contrast between modern and ancient thinking: “We tend to think of the cosmos as a machine and argue whether someone is running the machine or not. The ancient world viewed the cosmos more like…a kingdom.” (35)

Functional Ontology is the cornerstone of Walton’s interpretation of Genesis One. Using this as his lens, he sees in Days 1-3 the creation of the three fundamental functions of life: time, weather, and food. “So on day one God created the basis for time; day two the basis for weather; and day three the basis for food. …If we desire to see the greatest work of the Creator, it is not to be found in the materials that he brought together—it is that he brought them together in such a way that they work.” (59) Perhaps a better translation of “It was good”, then, would be “It worked.”

From here, Walton proposes that Genesis One “should be understood as an account of functional origins of the cosmos as a temple.” (84) Because “divine rest takes place in temples,” (87) the seven days of creation are best understood as a temple inauguration. “By naming the functions and installing the functionaries, and finally by deity entering his resting place, the temple comes into existence—it is created in the inauguration ceremony.” (89)

The implications of this interpretation are numerous., but I will only mention two. First, if Genesis One is an account of functional origins rather than material origins, there is no conflict between a “literal” reading of Genesis and the findings of evolutionary science. (Walton argues that the real fight between the creation (and ID) camp and the evolution camp is over teleology, and he makes some interesting prescriptions for public scientific education.) Second, if the cosmos is God’s temple (or divine resting place) then there are no such things as natural resources—there are only sacred resources, and we must adjust our ecology accordingly.

Walton’s book offers valuable insight into the Genesis One debate, and ought to be carefully examined by those on all sides. There is much more in the book that is worthy of discussion, and it is accessible enough to encourage conversation between all interested parties.

Questions: Does Walton present a reading of Genesis One that allows Christians to remain theologically and exegetically faithful while being scientifically relevant? Do you find the argument of functional ontology convincing? How does this interpretation change the game on cosmic origins?