20 Since you died with Christ to the elemental spiritual forces of this world, why, as though you still belonged to the world, do you submit to its rules: 21 “Do not handle! Do not taste! Do not touch!”? 22 These rules, which have to do with things that are all destined to perish with use, are based on merely human commands and teachings. 23 Such regulations indeed have an appearance of wisdom, with their self-imposed worship, their false humility and their harsh treatment of the body, but they lack any value in restraining sensual indulgence.

The first verse of this section requires two explanations. First, what does it mean that believers have “died with Christ?” In Paul’s language, to die with Christ means to be crucified with him. In other words, believers participate, in spirit, in the death that Jesus experienced in his body. This is what is symbolized in our baptism. We are buried with Christ in death as we go under the water, and we rise again to new life as we come out of the water.

Second, what does Paul mean when he talks about “the elemental spiritual forces of this world?” Interpretations vary. Several translations use the phrase “elemental spirits,” while other commentators use the term “basic principles.” In their respective translations, N.T. Wright and Eugene Peterson opt for “worldly elements” and “pretentious and infantile religion.” It is difficult to say, with precision, what Paul had in mind, but he seems to be talking about paradigmatic human spirituality, which is always full of rules but devoid of spiritual value. Humanity’s basic and universal efforts to be better are useless, and therefore ought to be rejected.

Humanity’s basic and universal efforts to be better are useless, and therefore ought to be rejected.
This type of life, bogged down by religious rules and regulations, belongs to the old way of living. When we die with Christ, we die to the fruitless human efforts to become more than we are. Growth, which we have seen earlier in this chapter, is only possible through the power of, and connection to, Christ. Humanity’s rules, which sound like a list of Don’ts, don’t have lasting value because they only function within this world. This kind of asceticism doesn’t actually make us better, because “asceticism has to do with the rudiments of the world and not the riches of the kingdom.”[i] Asceticism, whether Jewish or pagan, cannot teach us about the kingdom of God because it does not deal with the things of the kingdom. It is focused, often with laser-like precision, on the things from which we must abstain in this life. “Do not handle! Do not taste! Do not touch,” Paul mocks. But abstinence from food or drink do not, in and of themselves, bring us closer to God. END_OF_DOCUMENT_TOKEN_TO_BE_REPLACED
August 29, 2016by andy
Devotional

Have you ever climbed a mountain? Based on the pictures in promotional church pamphlets, it looks exhilarating. It’s not. It’s exhausting. I mean, there is a rush when you reach the summit, but then you immediately feel the need to lie down and take a nap.

Which is exactly what I did after climbing Yosemite Falls. I carried a pack full of camera gear and water up the steep incline of the 3 mail trail. It must have weighed 60 pounds. When I reached the top, I lied down on a rock next to the river, a stone’s throw from where it crashes over the edge of cliff to the valley below, and fell asleep. It was the sweetest nap I’ve ever taken. 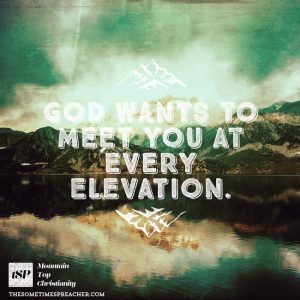 We often call our most intense encounters with God “mountain top experiences.” These are the good times, spiritually speaking. We feel close to God, hear from him personally, and experience significant growth. Spiritual experiences like these are necessary and valuable seasons of every believer’s life. But they are exactly that – seasons. So what happens when we chase these spiritual experiences all the time?

Bouncing from mountain top to mountain top is not how God intends for us to live. It is not normal to live that way. Instead, God wants to meet us at every elevation, whether that’s at the glorious summit or in the deep valley. Your life happens where you are, not where you think true spirituality demands you to be. Learning to be present to God in the face of your life’s circumstances is one of the most crucial lessons of your journey of discipleship.

Mountain top Christianity is an illusion. You’ll burn yourself out chasing the peaks, and you’ll foolishly come to believe that no true Christian can reside in the valley. Psalm 139:8 declares, “If I go up to the heavens, you are there; if I make my bed in the depths, you are there.” God is where you are. He desires to meet you in the good times and the bad. Jesus took on human flesh to show us that God has run to us, that he intends to meet us in our need, to rejoice with us, to mourn with us, to help us along the way.

If you keep pursuing mountain top Christianity, an overly experiential perversion of the faith, you will eventually fail to encounter the risen Christ at all. Your faith will become about the experience rather than the Person. The reality of your journey with Jesus is that you will find exhilaration on the heights, but you will find nourishment in the depths. Do not neglect one for the other. Rather, abide closely with God no matter the geography. 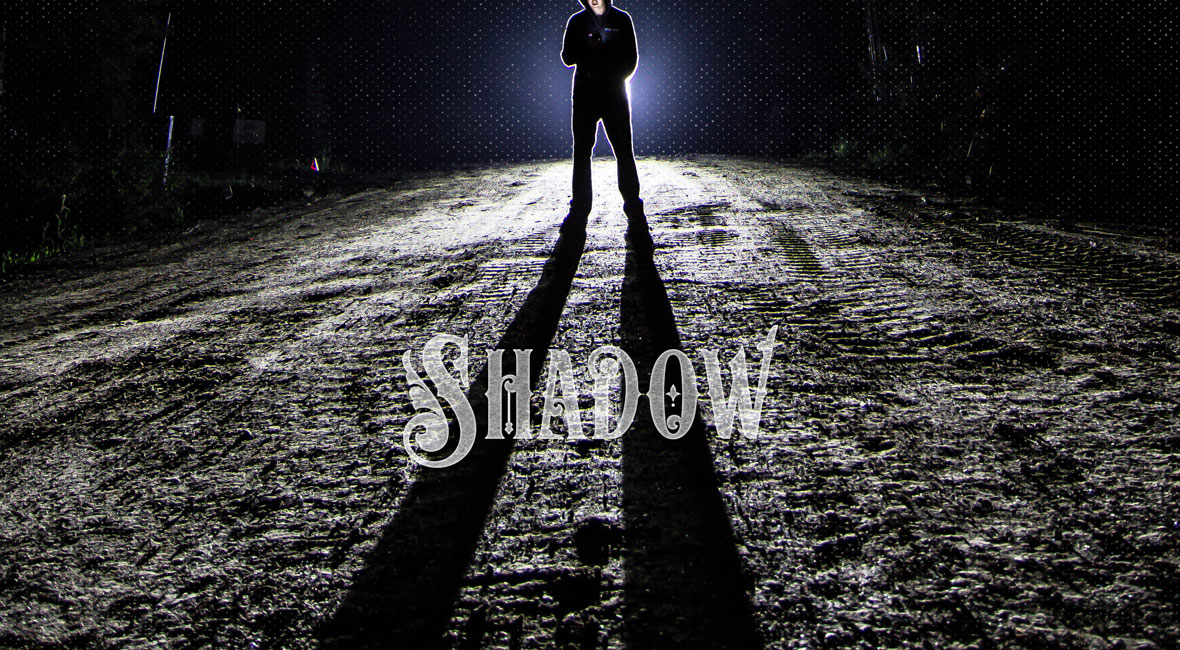 A good filmmaker knows how to terrify his audience with just a shadow. You never have to see the actual monster to be gripped with fear, just the long dark outline suggesting how horrible and mutilated the beast is. Of course, this same effect is used as comic relief when the strange shadow turns out to be a cuddly kitten.

We are frightened by shadows because we fear what might be casting them. Rarely, however, do we mistake the shadow for the real thing. But this is precisely what Paul warns us about in Colossians 2:16-17. He said that the food laws and holy days of Judaism were not the real thing that devout Jews thought them to be. The real thing, he said, is Jesus.

Jesus is the reality to which religion points. All the things that we might think are so important – obeying religious laws and customs, observing holy days – find their fullness in Christ. Religion is good and true as long as it is centered on Jesus. It is good to obey the rules, but only if we are acting from a heart that is devoted to Christ. Christless religion is like grasping at shadows. It’s not that religion, ritual, or rules are unimportant. Nor is it that they mislead us. It is that they are empty apart from Jesus.

If you feel that your religion has grown stale, that the rituals of what you do at church or in your daily devotions has become mere routine, it is time to lift up your eyes and see who is casting the shadow. Jesus is the real thing. It’s time for you to re-center your life and your religious activity around him. We drift so easily. We so quickly relapse into following shadows instead of worshiping the reality. Here is a prayer to help you re-center around Jesus. 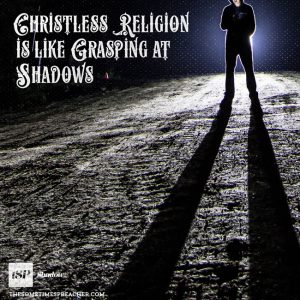 Jesus, you are the reality;
You are the fullness;
You are the truth.
Center me around yourself.
Take your throne again
In the depths of my heart.
Cast your shadow across my life.
Fill my empty religion
With your holy presence.
Capture my imagination,
My devotion,
And my desire.
Be yourself in me
That I may find myself in you.
Amen.

16 Therefore do not let anyone judge you by what you eat or drink, or with regard to a religious festival, a New Moon celebration or a Sabbath day. 17 These are a shadow of the things that were to come; the reality, however, is found in Christ. 18 Do not let anyone who delights in false humility and the worship of angels disqualify you. Such a person also goes into great detail about what they have seen; they are puffed up with idle notions by their unspiritual mind. 19 They have lost connection with the head, from whom the whole body, supported and held together by its ligaments and sinews, grows as God causes it to grow.

In this paragraph, Paul warns the Colossians against the influences of bad religion. More specificially, he tells Christians not to let false teachers judge them by their religious observance or spiritual experiences. Many scholars believe that Paul had specific opponents in mind when he wrote the letter, likely a group of Judaizers (strict Jewish Christians who taught that salvation was open to Gentiles through Christ, but that all must obey Torah to be saved) like those who corrupted the Galatian churches. While this is quite plausible, I struggle to see that Paul is singling out any particular group or teacher, as he does in Galatians or 2 Corinthians. It seems more likely that the apostle is drawing on his long experience and warning the fledgling church about the types of false teaching that he has seen creep into churches elsewhere. He is alerting the church that attacks will come from both sides – from Jewish teachers and pagans alike.

In verse 16, he is clearly sounding the alarm against Jewish Christians who would seek to place Gentile believers under the yoke of Torah. Food laws and holy days were essential to the life and culture of Judaism, and Jewish converts would have sensed no need to abandon these. But Paul is clear that the Gospel does not demand Gentile believers take up these practices. No doubt he is remembering here the words of Peter at the Jerusalem Council: “Now then, why do you try to test God by putting on the necks of Gentiles a yoke that neither we nor our ancestors have been able to bear? No! We believe it is through the grace of our Lord Jesus that we are saved, just as they are.”[i] Torah observance never saved anyone; therefore the Gentile Christians could not be condemned for failing to keep it. END_OF_DOCUMENT_TOKEN_TO_BE_REPLACED 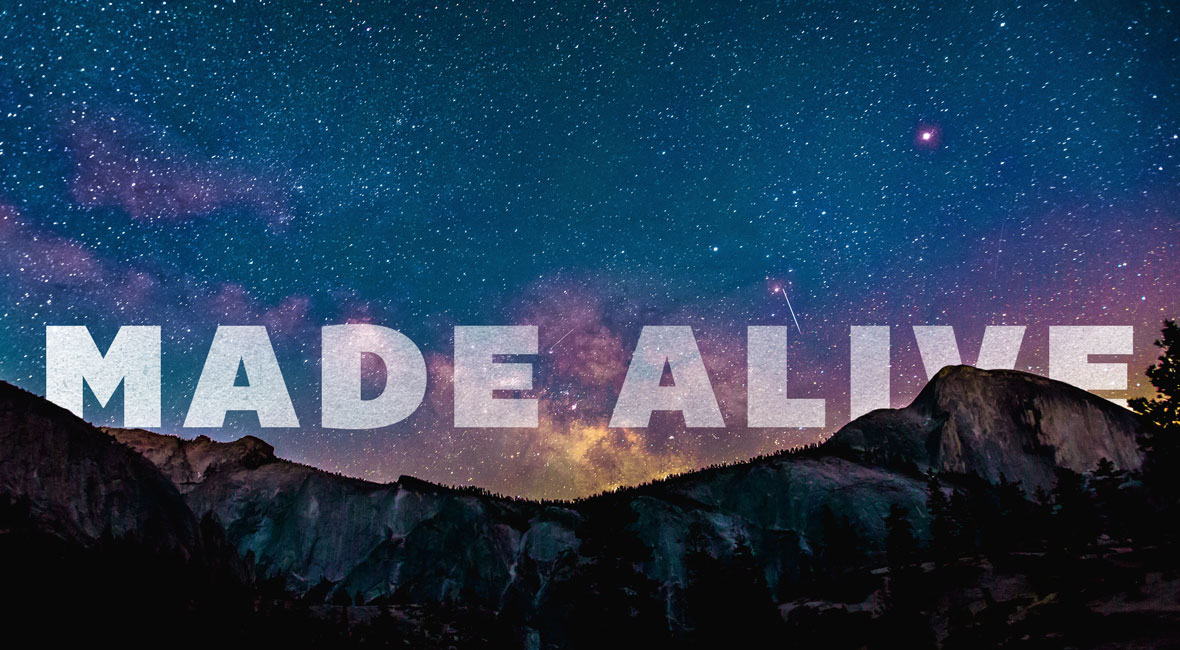 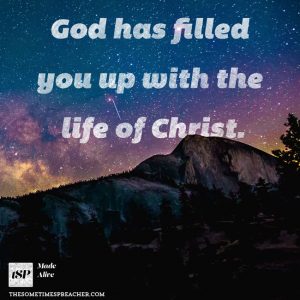