What I Didn’t Realize

Tonight, as I was driving home from work, it occurred to me that I’ve been at working at my present church longer than I was at Unbound.

Repenting [or, What Does it Mean that Jesus is King Amidst Financial Ruin?]

Last Thursday we were driving from Columbus to Toledo and I was considering what it meant that Jesus is King of all creation. Mind you, not that he is becoming King, or will be King when he comes back, but that he is King right now. For two and a half hours the sun seemed to remain fixed in the glorious golden position of early evening. Hues didn’t change, but remained rich shades of gold and blue. Clouds were still. Shadows were long, yet translucent. Creation itself cried out, “He is risen! And he reigns!”

Some would say, “We ought to ask what Jesus would do if he were in charge of the markets.” But he is King! So that question doesn’t make any sense whatsoever. The real question is, “What is he going to do now that the markets are in ruins?” And, “How is he going to do this?” And, “Whom will he entrust with the task?”

The common human answer to solving large-scale problems (and even small-scale problems) is centralization and control. We tend to reduce decision-makers, centralize authority and power in one individual (or a small group of individuals), and try to bring everything under the control of a singular power structure. Exhibit A: The firing of GM’s CEO by the President of the United States.

But there already is a singular authority, and his name is Jesus the King. (Not my King, or our King, or could-be-your King, but the King.) And yet, from what I understand about Jesus (which is very limited), he doesn’t seem to care much for centralization or control. He pushes things back out to us. He entrusts us with the problems of the world. And not just to a select few, but to many of us–even to those who have not sworn their allegiance to him.

But those who have sworn allegiance to Jesus have a special, mutually-acknowledged, relationship with him. It is as though we are the brothers and sisters of the King. In fact, this is precisely what the Bible says we are–sons of the living God (and because we are sons, we are also full heirs, which is true for both men and women), even as Jesus is the full and true Son of God.
So then, my question is for the Church. If Jesus is King (which he is), then what is your response (as confessors-of-allegiance to him) to the financial crisis? This financial house-of-cards has been built on greed and debt-dealing. What say you, Church? What say you, Evangelicals? Are you innocent? Have you pointed the way toward freedom and financial wholeness? Has yours been the voice that has spoken truth to the powerful forces of corrupted capitalism, greedy profiteers, and debt-dealers?
Woe is me, for I am a man with a maxed-out credit card, living among a people with maxed-out credit cards. I have bet on the future and lost. I have purchased non-essentials with money I don’t have. I have dined in the lap of luxury while claiming poverty. I have eaten and drank, only to wake up the next day to find myself still breathing, and repeat the revelry again and again. I have paid money for that which does not satisfy, pressed down the guilt, and filled the emptiness with more spending. I have done this. The financial crisis is my fault. I am to blame.
I should have joyfully pointed the way for others. But I cannot. I should have stood up, with the moral authority of a life-well-lived, and said “Enough!” But I did not, and I cannot. I have not given full allegiance to Jesus the King. I have held from him Money. I have given my allegiance to Credit (a god some might call Mammon). I have withheld from myself no good thing, to my own moral and financial poverty. God forgive me. This crisis is on my hands.
March 31, 2009by andy
Blog

I can’t sleep tonight. At least not yet. I came downstairs to connect with God. Opening my mouth to pray, all I could say was, “Jesus, I want to be near you.” I say it again and again, but oh how the mind wanders. Thinking of work. Always work. Even when I open the Scriptures it’s to a portion I must read for work. My job has become my relationship with God.

So I write. I write my prayers because in speaking them I am so easily distracted. And tonight I pray for Ember, the unborn church.

The image that comes to my mind whenever I think about Ember now is of a man (probably me), yellow-checkered shirt and ratty blue jeans, walking down a street lined with old homes. I know the neighborhood. It’s Clintonville, just north of campus. But the image is far different than the one I used to have. The old image was also of a man (certainly me), but that man was preaching to a congregation of thousands. Illuminated by stage lights. Supported by rock and roll. Leading a mass movement with all humility and character, or so I hoped. Now it’s a man walking.

So, God. It’s up to you. Too much has to happen that is beyond my control. I will walk, but you must lead. You must clear the path through the jungle. You must blaze the trail through the wilderness. You step, I step. Please, let’s move. 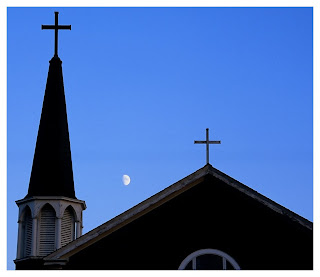 The implications of this are manifold. Most importantly, She is loved. Christ loves His Bride. Like all brides, the love of Her Lover gives Her life. His love breathes life into Her soul. The Church smiles and laughs when She thinks of how Her Lover loves Her. The Church weeps when She thinks of how She has abandoned Her Lover, and how He has pursued Her and restored Her. She lives. She moves. She has Her being in the One who loved Her so deeply that He died to give Her birth.
We murder the Church when we dehumanize Her. We murder Her when we call Her ‘Organization’ and ‘Institution.’ These are dead things. Inanimate. They speak only the words of the men who run them. But She speaks the words of life, because She has been given them–to keep and to guard. To speak light into darkness. To speak life into death. To speak truth to power. To speak ‘No!’ and ‘Stop!’ to evil. To shout, ‘In the name of Jesus, not here, not now, not ever!’
We murder the Church when we apply to Her the principles of Corporate America. We press a dagger through Her heart when we demand of Her productivity and efficiency. We send Her to the mines, we enslave Her, when we retrofit Her with the greased wheels of successful business practices. The Church, after all, does not produce. She begets.
She is alive. He is alive. He calls to Her. Does She answer? Does She hear? Who has torn out Her ears? Who has clipped Her tongue? Why are You silent, O Beloved? Why are You still? Don’t You know that You are not It? You are She.
March 3, 2009by andy
Blog

I’ve been doing a lot of studying lately. December is an off-month for me, which means there are no classes to teach. So I’m trying to take advantage of the downtime by preparing for the classes that begin in January. I’ll be teaching Galatians, Hosea, and doing an e4 session on the Wisdom Books.

The book I chose to study in preparation for the Psalms (Just one of the five Wisdom Books) is “Praying the Psalms” by Walter Brueggemann. I chose the book mostly because it was short and appeared to be both scholarly and practical, which is the thrust of our e4 program. I should also point out that in my first e4 session I railed against Brueggemann’s awful exegesis of the book of Luke, so coming back to him is a work of redemption.
His book hasn’t particularly blown me away, but I just finished the second chapter, “The Liberation of Language.” I appreciate the distinction he makes between language that describes things as they are and language that creates new spaces. The Psalms fall into the latter category. These poems and prayers do not describe the world as it is. Rather, they create a space of communion between hurting people and a healing God, or between celebrative people and an overjoyed Lord. They are not the language of, to use my own experience, computer engineering. They are the language of theatre.
Psalms are words which occupy a space for which there are no words. They create a bond between creature and Creator. They give breath to both inexpressible grief and joy. In the Psalms we find a depth of true expression that we did not know existed, or did not think we had permission to speak. The Psalms set our hearts free to speak to God as sons and daughters, with all the familiarity of in-the-family language. They are the inside-jokes, so to speak, of God’s household. They are our special language to him–a personal prayer language for God’s children.
They are also prayers that we can offer on behalf of others. I am not always writhing in the agony of Psalm 22, but more often than not, I know someone who is. These are our prayers for ourselves and for each other. May it be so in me.
December 19, 2008by andy
Page 90 of 95« First...102030«89909192»...Last »