A Simple Message of Scripture 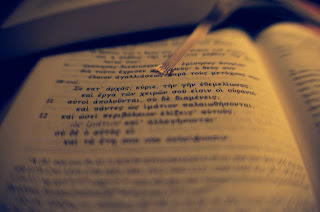 Most Christians will readily admit that understanding the Bible can be a daunting task. There are so many strange names, places, customs, and sayings preserved in the text that it can feel awfully remote. One of the things that preachers love to do is whittle the story of the Bible down into a short, memorable phrase that will help the average Christian understand what it’s about. Some examples you might hear on any given Sunday morning are:

I freely admit that I’ve done this sort of thing. I like to think of the Bible as the story of Redemption & Renewal; or of God reconciling humanity back to himself; and on this blog I even described the Bible as “the story of God in search of friends.” All of these are helpful, and describe one particular way of looking at the Bible.

I’d like to add another one to the list. One way of understanding the message of the Bible is hearing God say this: You need me. I want you. We could say that the Bible is the story of God in dogged pursuit of humanity, which has failed to acknowledge their need for him.

We need God. You need God. He knows this. The Bible says, “in him we live and move and have our being.” Our very lives depend on God. But he doesn’t sustain our lives begrudgingly. He doesn’t get tired of us. He doesn’t want to write us off. He wants you. He has a place for you in his home. He will treat you like a son or daughter. He wants to tell you about himself and yourself and how you fit into his plan for the world. So the next time you look at your Bible, hear God saying to you, “You need me. I want you.”

Rejoice in the Lord Always

I’m grumpy in the morning. Most nights Breena and I wake up several times to either comfort the kids, give Zeke a bottle, or change his diaper. So, naturally, when the kids wake up at 6:00 am chipper and ready to go, we’re not. And I’m especially grumpy when I’m tired.

This morning I had to apologize to the kids for being mean. Sometimes I’m a bigger baby than they are. Eisley and Cyrus are both very gracious and forgave me, then wanted to give me multiple hugs and kisses. What a glorious picture of grace!

I opened up the Bible and read a single verse from Philippians to them: “Rejoice in the Lord always. I will say it again, Rejoice!” I explained to the kids that rejoice means that we’re happy about Jesus, and we say, “Praise the Lord!” We practiced that several times while simultaneously throwing our arms in the air.

When Cyrus gets angry he says, “My eyebrows are down”, and he furrows his little brow. Eyebrows down, apparently, is the angry face. But I told them that rejoicing is when our eyebrows are up, and Cyrus said, “My eyebrows are way, way up”, while lifting his eyebrows almost to his hairline.

For me, this is one of those verses that is easy to understand but very hard to do. I’m not naturally a glad person. When my kids wake me up at 6:00 am my first thought isn’t, “Praise the Lord!” But maybe that just means I take them for granted. After all, isn’t it praiseworthy that they survived the night? And that nobody snuck into our house and stole them away?

Rejoicing is a matter of perspective, and I can see much clearer when my eyebrows are way, way up.

One of the most important lessons we can learn in this life is that God can’t be manipulated. There is no ritual act we can perform that will change God’s mind. We can’t compel him to act by our good deeds. There is no magical incantation that will stir him up and cause him to act in our favor. So why do we always try to pull this kind of crap with God?

I just finished reading a great book by John Oswalt called The Bible Among the Myths. (Book Review coming on Friday.) The core thought of the book is that the Bible is radically different from the other sacred texts of the ancient world in that it presents a completely new way of seeing the world.

All of ancient Israel’s neighbors (and many cultures today) viewed the world as an extension of a greater, unseen reality—the realm of the gods. The two were connected the way that you are connected to your shadow (with this world being the shadow). John Oswalt calls this idea Continuity. The physical world and the spiritual world are continuous.

This means that what you do in this world is also being done in the spiritual world. For example, the ancients understood the earth and the sky (and the sun and the moon and the clouds) to be gods. In order for crops to grow, it had to rain, which was the act of the earth and the sky having sex. So if you wanted it to rain so that your crops would grow, you would have sex with a prostitute at the shrine of your god. Your sex act in the physical realm meant that the gods were having sex in the spiritual realm. In other words, the gods could be manipulated.

But the Hebrews did not believe this (or at least their scriptures did not teach it). They believed that there was only one God and that this God was not continuous with the physical world in any way. He was utterly separate from it. The word for this is Transcendence.

Because this God was transcendent, he could not be manipulated. Whatever ritual act you might perform would have no corollary in the spiritual world. God is completely other than the world, and therefore every divine action is an act of grace. This means that you are not in control.

But the good news is that this God is fundamentally characterized by love, truth, faithfulness, and integrity. He deeply, deeply loves you. He has our ultimate good in mind, always. He is a God who is safe to surrender to, one to whom you can hand over control. He is a God who desires relationship—he wants to be known by you, and for you to fully and willingly reveal your heart and mind to him. Unlike the gods of the ancients, he can’t be manipulated, but he can be loved.

The Function of Humanity

One of the things that gets lost in the origins debate is the role assigned to humans in Genesis One. We are:

The most important of the four is that we are created in the image of God. “All of the rest of creation functions in relationship to humankind, and humankind serves the rest of creation as God’s vice regent.” (Walton, 68) In other words, we represent God to creation, ruling it and caring for it as he would. This, of course, has many ecological implications, but I’d like to stick with the theological implications for now.

Humans are not assigned such a high place in the creation stories of Israel’s neighbors. In fact, the purpose of humanity was to serve as the slaves of the gods. We are here to see to it that all of the gods’ needs are taken care of. Creation has been made in order to serve the needs and pleasures of the gods, and humans are often a most despicable byproduct of some great cosmic battle, being made from the blood of some horrible chaos monster. “In the rest of the ancient world creation was set up to serve the gods, a theocentric view, in Genesis, creation is not set up for the benefit of God but for the benefit of humanity—an anthropocentric view.” (69)

If creation is anthropocentric, it is because God has no need of creation. That is to say, he is distinct from creation. All the other ancient cultures viewed creation as an extension of a greater, unseen, and truer reality—the realm of the gods. (see also, The Bible Among the Myths by John Oswalt) Therefore, what happens on earth is happening in the truer, invisible reality. But the genius of Genesis One is that it establishes the transcendence of God—the teaching that he is distinct and above creation. He has created this world not for himself, but for us.

Rather than being an inferior copy of a greater, unseen reality, God elevates the state of creation by making it his temple! On the seventh day he moves into his temple because, as Walton points out, divine rest always takes place in a temple. Now, every temple has an image of the god to whom that temple belongs. And what is the image in God’s temple? Humans!

For the last several days I’ve been blogging through John Walton’s book, The Lost World of Genesis One. It’s a fantastic book that has very interesting and compelling interpretation of Genesis 1. Today I’m going to dig more deeply into the text and lay out Walton’s understanding of the six days of creation.

The table below represents the arrangement that Walton sees in the six days of Creation. For those of you who are aware of the Literary Framework interpretation of this chapter, you’ll see some basic similarities between the two.

On the first day, God created light and separated it from darkness. He called the light “Day” and the darkness “Night”. He is clearly establishing the function of time on the first day.

On the second day God created something called an expanse, or a firmament, which the ancients believed to be a material object that held back the waters in the sky. The expanse had windows and doors in it that allowed rain to come through in season. We can understand this today as God establishing the function of weather.

On the third day God gathered the lower waters so that dry ground would appear, and out of that dry ground grew vegetation. In other words, he created the function of agriculture, or food.

Time, weather, and food are the crucial and unique elements required to sustain life on earth. They are the ordering principles of existence. So on the first three days God is creating the fundamental functions of existence.

On the fourth day God creates the sun and moon to govern time. On the fifth day God creates fish and birds, not to govern weather, but to populate the spheres of sky and sea. He also gives them a function: Be fruitful and multiply. Likewise, on the sixth day he creates animals, not to govern the land, but to populate it with the same function: Be fruitful and multiply. The function of the beasts is life.

This, of course, brings us to humans. But that’s such a big topic that it deserves its own post.